I leafed through its pages in a Barnes & Noble bookstore. It was a huge and majestic book, as heavy as fascinating. It contained around 700 covers -in the size of trading cards- of The New Yorker, a weekly magazine that has been publishing illustrations on its covers since 1925. I loved every single one of them. It was an object of desire. It was a gem. I was really expensive. 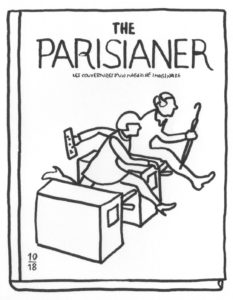 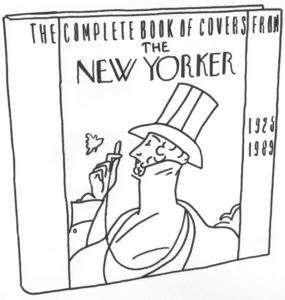 I thought that maybe I’d find it in some street stall at St. Mark’s Place.

I experienced something similar when I was searching in one bookstore of Bd. Saint-Michel: this time it was a smaller book, as light and classy as fascinating. It contained around a hundred of covers of The Parisianer, an imaginary magazine that defined Paris in the same way as The New Yorker did. This time the price was reasonable and I bought it. But… how didn’t I think of a book like this before?

As illustrators, we have a special relation with that magazine, with all those covers. The Valencianer wants, inspired in the idea of someone who, at the same time, took it from The New Yorker, to propose to different people of exquisite taste to take the image of Valencia and give it back to us with new colors added.

But The Valencianer is not an imaginary magazine: if you, kind reader, go beyond the cover, you’ll find the tracks to take a walk in the invisible Valencia, the undefined border between the horrific and the sublime.

The Professional Association of Illustrators of Valencia -APIV- is a meeting point since 1997. Besides representating, managing, promoting and defending the shared interests of the illustrators of Valencia, APIV loves the illustrated books that are compilations of a special subject. APIV has edited catalogs (followed by their respective expositions) where -for example- the members are asked to do their own version of posters of spanish movies (http://www.apiv.com/exposiciones/cinedepapel/), or to invent an imaginary animal, or to interpret characters from the universal literature who have extraordinary professions, or to illustrate reading points, or to design the labels of hotels that only exist in fictional works, and many other subjects (http://www.apiv.com/publicacions/categoria_3/catalogos).