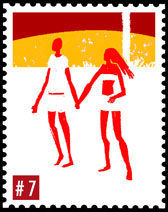 Cover:
The invisible river of València, in summer 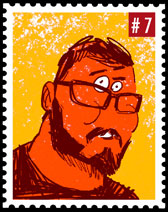 Xèlon XLF, the author of the cover, is from Mislata but lives in Valencia.

Illustrator and DJ, he’s well known for his work as an urban artist. He’s a graphic narrator that uses walls and facades, and he’s made up the term “Illustrated walls”.

Isn’t it great that under this pseudonysm is a muralist whose surname is, precisely, “Paredes”*? It’s like a plumber whose name is Johnny Pipe.

Xèlon is a big and sensible guy, just like the robots that he likes to draw everywhere. Some machines eternally in love, showing their irons, tubes, screws and eyes… machines who are willing to find couples to connect their screws and get oxided together.

He comes from a very special family of artists and he has no fear to try any discipline. For example, he has written scripts and in his wall paintings you can see a story behind, a reflection. Now he’s hooked to sculpture in the form of three-dimensional illustrations. He started drawing robots and now he’s building them, stroking every piece of metal.

When someone describes him as a graffiter, he explains that the graffiti is the need to scream and the urge to paint that scream in the wall. A graphic impulse.

Now, with his experience, he prefers to narrate his own fights on the wall, so everyone can see them.

It seems to be the same thing, but it’s not. 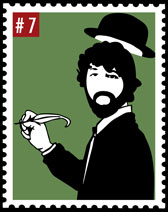 David Brieva Rosáenz, the author of Fear of rain -A semifictional story of an Asturian man in Valencia-, was born in Gijón and lives in Valencia.

David, like a good Asturian, is a friendly person, direct, committed and brave.

It’s not coincidence that he was soon elected to be the representative of the Master’s degree that brought him to live to Valencia. However, not a single tire was burned in that period.

He posseses a huge encyclopedic knowledge, analytical and reflective, that he divulges in the radio -currently he directs the podcast “Research laboratory of series” working along Áurea Ortiz and Mikel Labastida for the platform Podium Podcast; before that he had a mythical section about comics called “The intrusive cartoon” in the program “Coffee and landscapes” in Radio Klara. He also reviews comics for the print media. It’s opportune to say that he has a natural talent for communication and he’s known for telling stories in a fun and expressive way.

He’s also a collector of original comics and he owns a great selection from the best international authors.

In 2013 he opened with Luci Romero the library Bartleby, in the quarter of Ruzafa. A temple consecrated to books, comics and wine, that from the very first moment became an unique cultural sphere with all kinds of activities -presentations, talks, workshops, reading clubs, concerts and even theatre plays-.

1) His participation as an actor in the film “Knife”, playing the Horrible Death (2013, 99′).
2) His skill to cook the traditional “paella valenciana”. 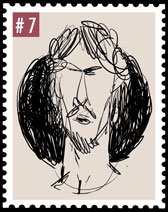 @elgrangerardosanz, the illustrator of Fear of rain, was born and lives (sometimes) in Gandía.

The one who writes this has been always suspicious of the illustrators that describe themselves as “doodlers” (or the ones who say “I draw for no reason”). I also mistrust the singers who presume to be “melodic tricksters”. I don’t like that false modesty… Well, Gerardo describes himself using both epithets in the profile of Conversaciones con el Huracán, his scientific-educational blog*, but not for any of the hateful reasons I can imagine. Therefore, you may ask, why?

Because he can describe himself as he wishes. Because a person who writes, draws, composes, writes poems, plays the accordion, sings in the band “La Pulquería”, designs publications, draws storyboards, builds toys, plays water polo (and he’s good at all these things)… should appear as an example in the textbooks.

But, oh! He’s also the king of the unfinished projects. He loves to start but not to finish. And this, in fact, makes him a doodler and a melodic trickster. Anyway, our collaborator is sincere.

Besides, people say that when he comes out of the water he looks like Poseidon.
Is this irrelevant? I don’t think so. 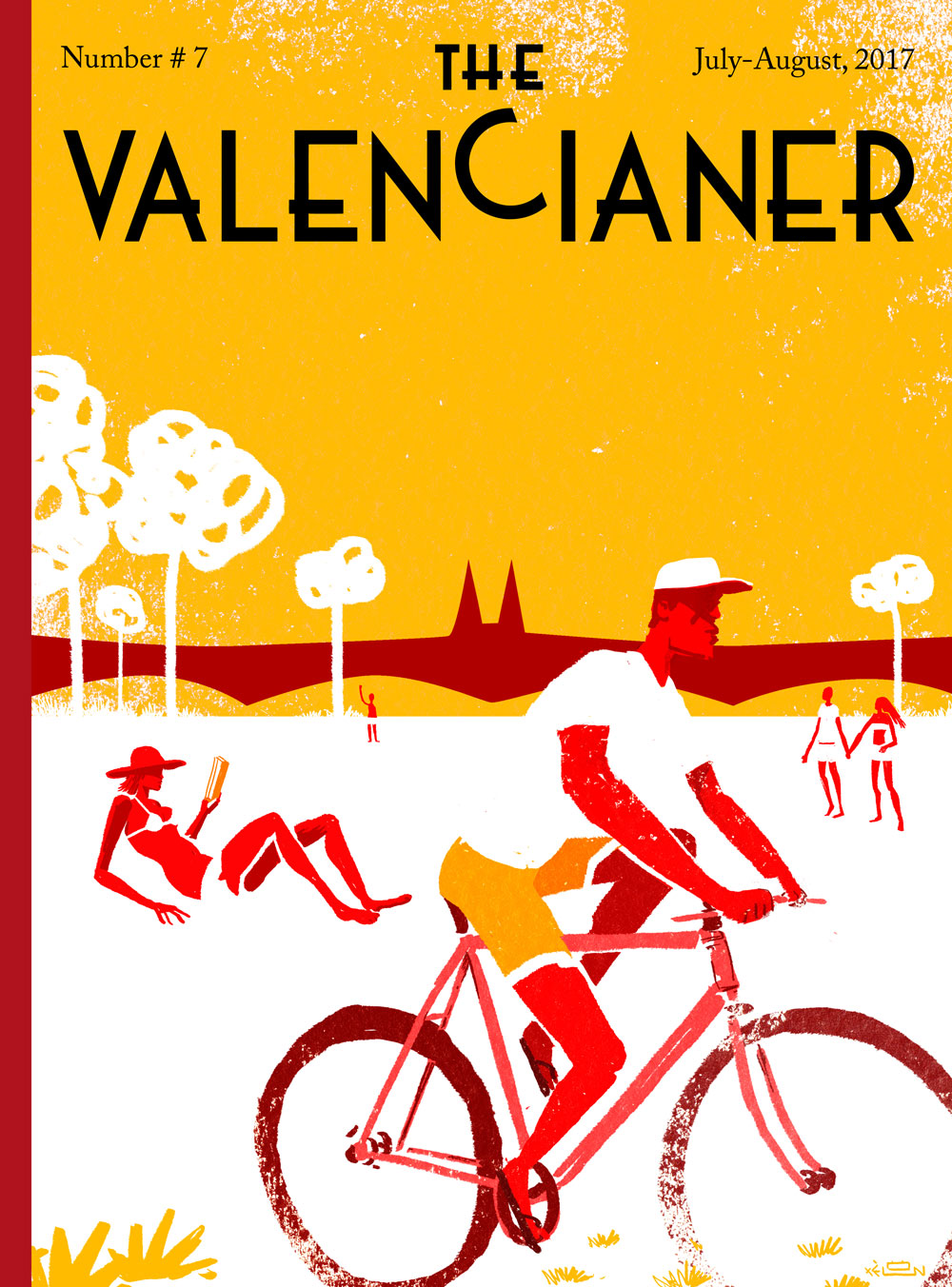 A semi-fictional story of an Asturian man in Valencia

21 of august 2007, my grandfather succumb to the horrible illness that put him to bed during his last years. Known as “El Flipau” by his family and part of town (in his own words, this nickname meant “the one who had seen the sun”), he claimed that he knew the various forms and shines of the king star because he had traveled one time to the Spanish Levante and enjoyed its pleasures. On that time he had accumulated a generous finance through some business he prefered not to explain.

What my bereaved family didn’t know was that my grandfather, in his last breath, had whispered in my ear three key words that would transform my existence: Nus, Icre, Punrroicot. In that moment I didn’t know that the morphine was speaking through him.

2008 was a very important year for the migratory movements. I contributed with my own unique adventure encouraged by the enigmatic words of my illustrious predecessor, plus the over-stimulation that the TV series Lost caused on me, after I took as mine the message in the final of the third season. I was predestined to go to the place where my grandfather found happiness.

2 months, five horseback ridings and 3 robberies after I left Asturias, I conquered my goal reaching the North train station of Valencia, full of illusions and with a ferocious determination. Luckily, both regions are very well communicated.

When I arrived I fell in my knees. Marveled by the powerful brightness coming from the sky, I needed a couple of hours to recover myself, and surprisingly I discovered that the local people were not only unmoved by the privileged weather, but they had also misunderstood my situation giving me 3 euros in small coins, some cigarette butt and one esparto hat.

At that moment I realized that those people were as generous as ignorants, and I discovered the meaning of the first mistery whispered to me by “El Flipau”.

To stay loyal with my student condition, I found a place to live in a flat offered as a refuge for intellectual young people. We formed a peculiar team, like the beginning of a bad joke, a girl from Birmingham, a guy from Sueca and a guy from Gijón.

The communal living was fluent and we discovered soon that the gastronomy was our real connection: the generous Asturian rations, the shared Valencian dishes and the sistematic English rapine. The paella was followed by the fabada and the oven rice followed by the cachopo, in front of some astonished british eyes.

But what started as a shared culinary practice became an alimentary competition for power. The kamikaze gastronomic ascent that took place during those weeks was heavy and caused significant loss. In the start of the third month we suffered a Brexit, and we had to reconsider our expansionist estrategies. We signed an armistice that took us to a fruitful collaboration that opened my eyes to the clear supremacy of the rice, and helped me to resolve the second mistery of my grandfather’s nirvana.

Once I finished my studies it was imperative to find sustenance, and destiny introduced me to a friendly couple that without any hesitation put me under their wings. They dressed impolluted, their look was elegant and rigorous, and they assumed the carpe diem philosophy as a rule. I learned a lot of things from them: that there’s no need to know a certain subject to dedicate yourself professionally to that subject, that there’re some animals that will extinguish if you don’t give them hard times, and that the phrase “everybody do it” will make yourself feel comfortable.

They claimed to had multiple “contacts”, and above all they had a good friend, a mayor who was so tricky that he was making more money that the president of the government.

Later I was told by some uniformed men that the money they used were the money of everyone -me included- and now they spend the afternoons in jail with his friend the mayor, beloved by the rest of the prisioners.

After such revelation I fell to the ground and had a flashback of my arrival to Valencia, then I had a flashforward that showed me the entire Lost series and took me back to my reality but in an unusual illuminated state. The last enigma had been resolved.

Since that day I understand better the Valencian mood and the mistery of my grandfather’s happiness. What I still don’t understand is why -being an Asturian myself- I have a terrible fear of rain.