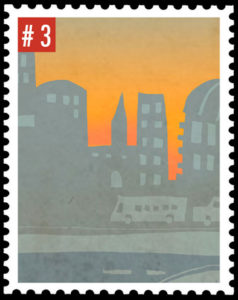 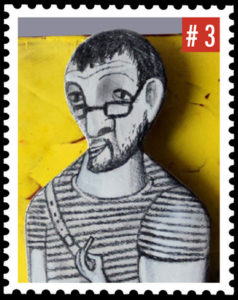 Carlos Michel Fuentes is the author of the cover. He was born in Cuba and lives now in Valencia.

“He quit baseball –his real passion– because of some early cataracts. Only child. He grew up among women and shortages in a centric apartment from Vedado. He abandoned Cuba in the early nineties, after a long period of grief and dissapointment. He never returned. Graduated from Fine Arts. He became a scenographic painter and worked for films, theater and TV in the United States. Graphic designer. Illustrator. Compulsive writer”.

It’s hard to define Michel –a familiar face for our magazine (please read issues 0 and 1)– better than he did in the backcover of his novel of 2012, Anabah. But we can mention that he returned –recently– to Cuba to discover new things replacing the ones he expected to find. While he was telling me this, his eyes got lost. 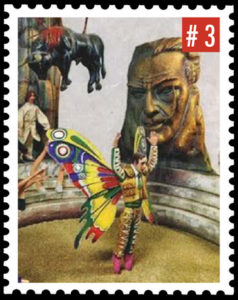 A tremendous event happened in the word of the Fallas of Valencia in 1954. The world famous surrealist artist Salvador Dalí designed the most outstanding falla of the city, a falla that was out of competition and was sponsored by a group of remarkable guys called Falla del Foc. The reaction of the Valencian society was one of those things that justify the extraordinary initiatives. It was also one of those things that justify the neo–realist films. Berlanga‘s, for example. Even the stories of Jaimito.

Our contributor Alfons Aladreta (please read issues 0 and 1) has taken this historic event as a Point Jonbar* to create this parallel story and portray a city that doesn’t exist, but could exist.

To document this uchronia he visited this link, that we recommend you to read.

*A Point Jonbar (parallel world) is a real event that is turned upside down to speculate with some possible efects. It means to create parallel worlds inspired in the question: “What would happen if…?”
Two typical Points Jonbar would be, for example, the triumph of Hitler or the survival of the dinosaurs.

Stamp: Model of the falla of Dalí. 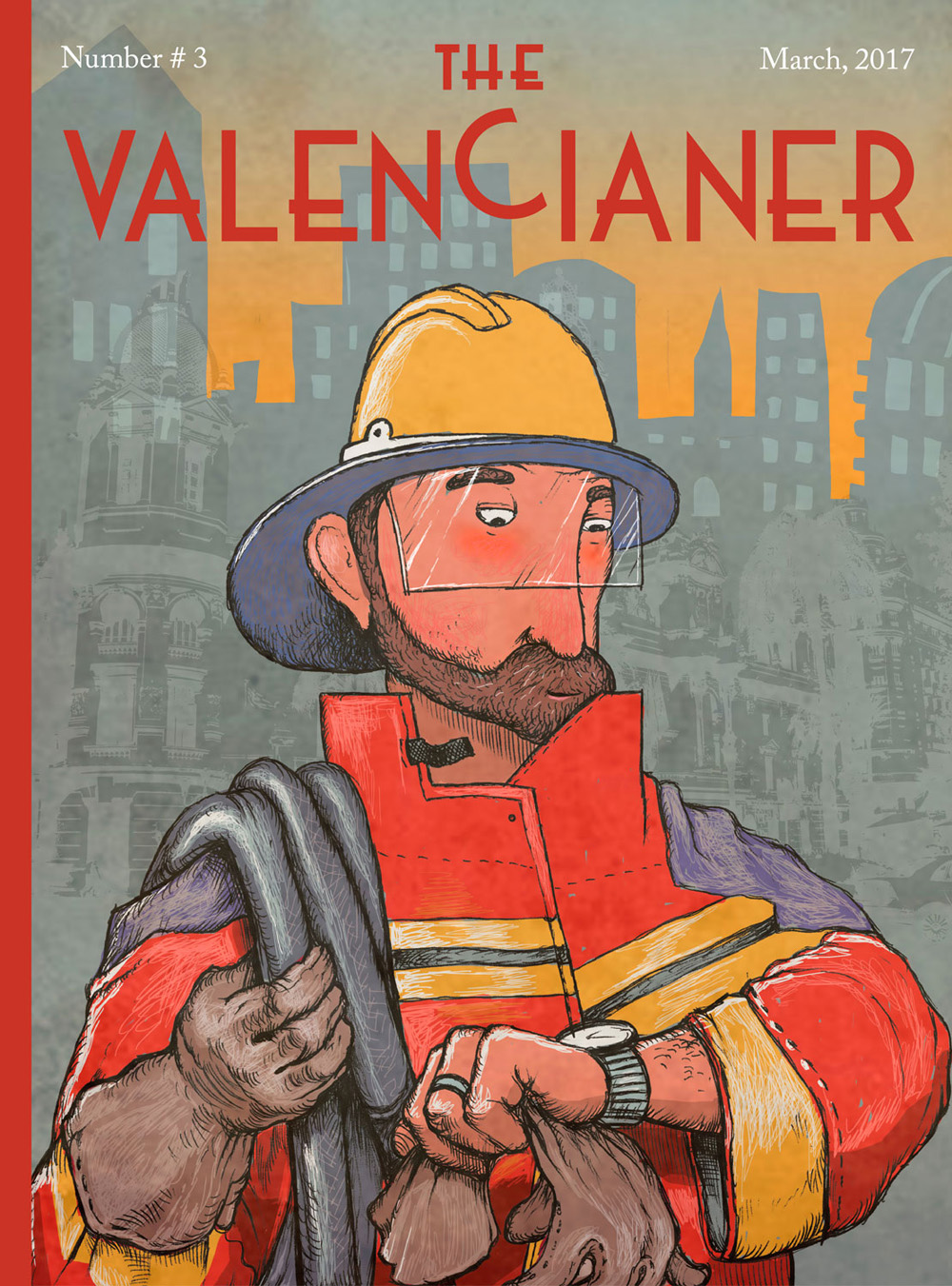 1953. Fourteen years after the civil war, the Spaniards continue living an eternal postwar. Spain –the only country that collaborated with the german’s nazi regime and survived– has an outcast government that isn’t admitted in any international organization, and it’s starting to become an anti–communist spot in the Mediterranean. All this, due to the tension between the United States and the Soviet Union. 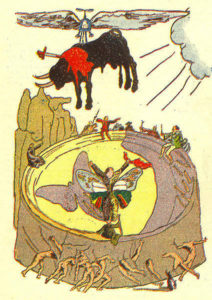 The dictator, taking advantage of the situation, tries to undo the international blockade.

Meanwhile, the famous american writer Ernest Hemingway, returns to Pamplona after twenty years and spreads the word about the popular celebration of San Fermín, where a crowd of people run in front of a herd of wild bulls.

At the same time, in Valencia, a remarkable team known as Falla del Foc, meets secretly trying to give a twist to a festival that, despite its spectacularity, doesn’t compete in fame with the Sanfermín or the Oktoberfest of Munich:

–It’s just a binge on beer and pork hocks!

–Don’t forget the cleavages of the waitresses…

–Shut up Vicente! What about the bunch of guys in berets running in front of the bulls? Do they show any cleavages? We’re doing something wrong, because I can’t understand that a bunch of drunk guys attract more people that our Fallas full of color, art and beauty.

–Come on! They’re different things. The spectacle of Pamplona has an ancestral taste that people from abroad enjoy. The bull runners seem to risk their life for nothing, just for tradition. 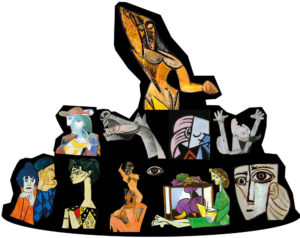 –Moreover, how the art and irony from Valencia could compete with floods of beer served by busty girls? We need a renewed approach…

–Art and irony, right? Some ironic artist… mmh… Maybe I have the solution, it’s a little weird… we need someone very famous, right? If Hemingway promotes San Fermín, we could have…

–What? Modern art? Over my dead body! 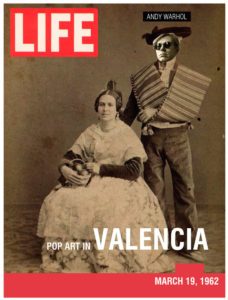 The secret meeting lasted a few more hours, accompanied with a heated debate. The younger wanted to hire Dalí. The older were totally against the idea. When the horchata (1) was followed by the mistela (2), some opponents changed their mind after knowing Dalí’s talent to transform into gold everything he touched. Everyone knew that, on those miserable days, the tourists and their money were needed.

–What will people say? What will the falleros artists say?

–People are fool and won’t understand. They will get mad and throw tomatoes. And the falleros artists won’t like that someone from another city come to create a falla. And on top of that… a catalan!

–Forget the falleros and people’s opinions! What matters is the word of the mayor!

–Forget the mayor’s opinion! What really matters is Franco‘s word!

–Ah, Franco! That’s a good one, ja ja! –At this moment they had switched the mistela for the barretxat (3)– Have you watched on NODO (4) Dalí xuplant–li el cul (5) to the dictator? Franco will love the idea!

Finally, they all went home after assigning to the author of the idea –a young journalist that we’ll call Borín– the magnificent mission to contact the Empordà genius.

The next day, with a terrible hangover, the secret meeting was partially remembered in a nebulous, like an absurd dream: A falla designed by Dalí! Ja Ja! Oh, my head! 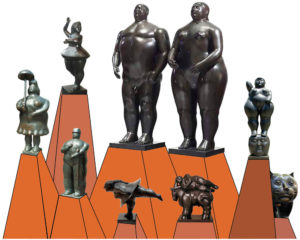 A telegram arrived early in the afternoon:

The die had been cast. The amazement and excitement started to shape a project that, surprisingly for this community and city, succed.

Once the contract was signed and the first sketches were drawn, the story was published by the press. The initial public reaction was of incredulity, then it became a joke that turned into indignation and, finally, into a great anger.

Some dissaproval voices came up alleging absurd arguments. As we all know, the more absurd an argument is, the more credible it appears to be. 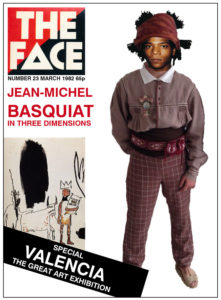 Basquiat in the cover of The Face magazine

Despite the optimistic vision spreaded by the press, with headers such as “An splendid promotional card for the tourism” or “An injection of renewed air from an internationally renowed spanish artist”, the voices of the traditional cavern opposed: “The genuine falleros have Valencian blood”, “The extravagant spirit of Dalí can’t project our people’s soul”, “We don’t need foreign artists, we have our own”.

Things got quite strange. In that time the fallero surrealism was not related with the dreams and the subconscious world. It was a synonym of grotesque and absurd humor, a caricatured and profane satire, a taste for the baroque and the coentor (6).

Nothing good was expected the day that the falla of Dalí was planted in the Caudillo square. The remarkable guys from Falla del Foc were looking at the people’s reactions from a prudential distance. Their bad faces turned into cheerful expressions. The overseas reporters highlighted the event.

–Gentlemen, this works! Take a look at these magazines. Paris Match, Life, American Geographic… all the world is talking about Valencia and Dalí’s falla!

–Look, Borín, everyone in my Casal (7) is in the mood. Really, “is shit”, “it’s not understandable”, “that is not a falla or nothing alike”… They even wrote the words “traitor” and “piggy” in the windscreen of the car.

–Clean it, man! We already know that there will always be people who will react badly to any change. But not only do we talk about ourselves … look and you will see all the people who are crowding to see the falla. 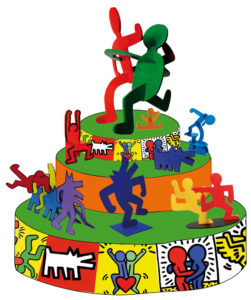 That march of 1954 was magical. Thousands and thousands of people walked around the falla of Dalí. Over the complaints of the traditionalists, some positive comments were heard, initially timid and later openly, specially from young people who appreciated the new vibes floating in the city. And a lot of falleros artists that were intimidated by the novelty, started to visualize a wide rande of artistic possibilities.

Due to the success, some other committees –besides the “Falla del Foc”– started to prepare their projects for the next year, thinking of collaborations with artists from Spain and abroad.

The most respected art dealers started to visit Valencia every year during the month of march, when you can experience –besides the music, fire, noise and joy– some great international art novelties, continuing with the tradition initiated those days in 1954, the event that changed everything.

(2) Mistela: Sweet liquor made of a mixture of grape juice and alcohol, with enough quantity to prevent its fermentation.

(3) Barretxat: Typical drink of Valencia made of a mixture of mistela and spirits.

(4) NODO: Acronym of TV news and documentaries, projected in the spanish movie theaters before the films. It was projected imperatively between 1942 and 1976, then in a voluntary way until 1981.

(7) Casal: Headquarters of the falla.

A friendly reader camouflaged after the nickname Edmon, sends us this work absolutely appropriate to the present moment and has drawn a smile on the editorial committee, so we have decided to share it with you. This native of Málaga must take a lot of time outside his hometown, because he has decided to reside in Valencia attracted by its imposing cultural offer. We are sure that we will have more news soon. And if not, look at their jobs. Here. 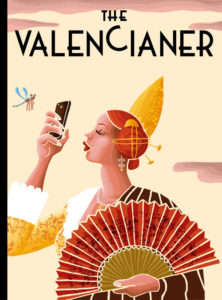 As you will see, our Fallas Special arrives on your screens when everyone has forgotten the ashes of the fallas 2017. But it is that we have marked as a special mission to extend in time all that is beautiful in life. LOL!

And, speaking of it, we show you here the precious cover that our illustrative collaborator Deima (please see #0) made for the section CONTACTO, in which she represents the mascot of The Valencianer in tribute to Eustace Tilley*, the famous dandy-mascot of The New Yorker Magazine.

We take advantage of the detail to call the Great Contest of Mascots of the Valencianer. You can design versions of the Deima illustration based on this beautiful fallera that photographs with her smartphone a dragon-fly of the Albufera. We would also like you to name our Mascot. A name with “hook” eh!

Our expert committee will select the best designs that will be immediately published in our magazine.

In addition, the selected ones will receive our fabulous BAT T-shirt (of their size), which you can have a look at our store.

Cheer up! Use all your wit in The Valencianer!

*On the first cover of The New Yorker magazine (February 21, 1925), a dandy staring at a butterfly through a monocle, drawn by Rea Irvin, the magazine’s first editor, appeared. This character became the mascot of the magazine. The comedian Corey Ford put the name of Eustace Tilley, for reasons that you will have to look for in Wikipedia, if you fancy.